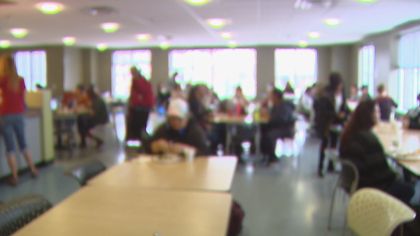 DENVER (CBS4)– Colorado cannabis companies have found it is hard for them to be charitable. Nonprofits often turn away pot profits for fear of losing federal grant money. But at least one Denver-based organization is not feeling any joint pain.

There is such a thing as a free lunch at The Gathering Place. The daytime drop-in center serves women, children and transgender individuals.

On Monday, those volunteering to serve the meal also happen to sell weed.

“Cannabis is willing and wanting to help,” said Shannon Brooks, VP of Marketing at Lightshade.

The helpers handing out lunch are employees of Lightshade, a company that operates seven dispensaries in Colorado.

Lightshade has a lot to give, but Brooks says it is a struggle to find nonprofits that will take their cannabis cash.

“It’s a shame because these organizations will accept money from tobacco or alcohol but not cannabis,” said Brooks.

With pot illegal federally, charities fear losing federal funds or their 501c3 status. That is not an issue for The Gathering Place.

“Because we’re privately funded, we’re really not worried about that at all,” said Leslie Foster, President of The Gathering Place.

She said, this year, her organization received $30,000 in marijuana money.

“Thirty thousand is a really substantial gift for us,” said Foster.

It has helped women like Ashley Stewart, a mother of four, who just got her GED and hopes to attend college.

“Thirty thousand is a really substantial gift for us,” said Foster.

It has helped women like Ashley Stewart, a mother of four, who just got her GED and hopes to attend college.

“I’m pretty sure there are millions of dollars across the industry that people are willing to give,” said Brooks.

The Gathering Place is happy to accept.

(This article was originally featured on CBS Denver.)